Some interesting data came out of the Reserve Bank recently. They have been tracking house prices and movement back to 1950. That is even before I was born… just.


It turns out that house prices have gone up since 1950… what!


They pay people lots of money to come up with that sort of revelation.


But actually the research has been more useful than just that because what they have done to give it more relevance is to strip out inflation.


So when it says that the median house price was about $100,000 in 1950, that wasn’t what the market price was back then, it was a lot less. That is in 2014 dollars, given what money buys you today. It is an interesting way of looking at it. 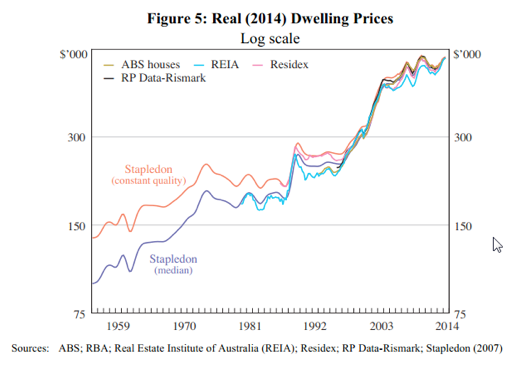 So when you look at the graph above you will notice that it was fairly flat through the late 70s and early 80s spiked in the early 90s to catch up to where it should be if you drew an average line through the graph and then flattened again later in the 90s. That was when inflation was high. So for example, if inflation was 17% as it was during the 80s and the graph is flat that means that property was keeping pace with inflation, hence 17 – 19% growth. Those of us that invested then will know that was the case. I bought quite a few apartments in those days and they doubled in value in just over 3 years.


So what does all this mean for the average investor?


It means that house prices go up consistently even during periods of high inflation.


It means that property is a good investment even in bad times so long as you hang on through the tough times.


It also means that anyone investing for anything less than about 7 years is gambling with the possibility that that might have hit one of the flat periods.


We have just gone through one of those flat periods similar to the early 90s so it would be reasonable to suggest that we might see a few years of catch up growth.